The air that tickles the back of my neck, the deep blue of the sky that refuses to dim, the drops that fight their way down my glass windows, the perpetual chuckle of the water against the tin roof bring with them, memories of paper boats in mucky puddles, of clattering teeth beneath enchanted eyes, of hair dripping with water, of praying for a rainbow with every but of shower, and of waking up scared of the thunder bout embracing the rain the next morning. What they cannot bring back, are those times. 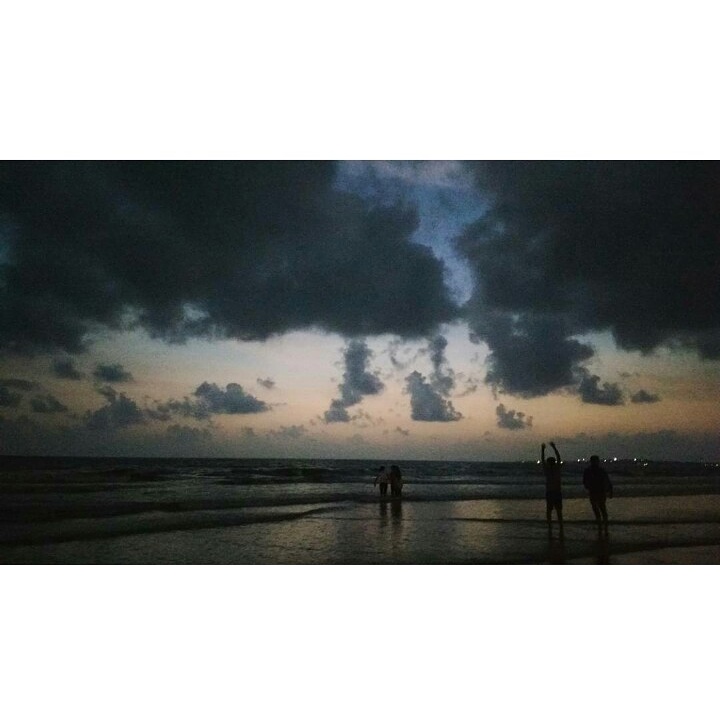 You know, those kind of places? The ones that make you feel at home. One walk around it, and you know what to find where. One mindful glance at it and you could navigate your way through it even on a dark night. The walls are so warm, you rather stay indoors than explore the world outside; the ceiling, just high enough for you to look up to when in doubt, and just stark enough to stare into and feel free. The kind of places that you want to go to after the day’s wandering about, trying to find yourself.

Works the same with some people too.

The Sun illuminated the Sky like it owned it, like it was meant to do just that. And it did its job to perfection. The Sky was covered every inch with radiance and warmth that was unparalleled. It needed nothing else. It would give anything to keep the Sun for life. But like every other ‘forever’ that is meant to end, when it was time, the Sun had to go. The Sky pleaded for it to remain, reasoned for it to stay; but the Sun was bound by habit and by its nature to lighten another dome in another land, to brighten another day elsewhere.

As the Sun approached the horizon, the minutes seemed shorter, and the Sun seemed lovelier. The Sky was too captivated by the light of the Sun to let it go simply. It held on with all its might and struggled for it to stay a tad bit longer. The beauty of this scuffle made the world marvel as the Sky took contrasts of shades no one knew could coexist, and combinations of colours impossible to replicate.

Even after the last bit of the Sun was out of view, the Sky refused to accept the loss. It held on to the memories it had had while the Sun shone ever so brightly on its barren land.

Like every remnant that has to taper off, the brightness of the Sun’s rays became too much for the Sky to hold on to. It had to let go of the memories to be able to survive the loss. In gradations that were invisible to the casual eye, the Sky melted back to the darkness it was born with. The light was gone, yes; but the warmth was there to stay.
When it had recuperated enough to notice, the ever so gracious Moon stood by with its speckled beauty and open arms to offer all that it had to the bruised Sky. The Sky allowed the Moon to beautify its stark self. As if it weren’t enough, the Moon called for the stars, and swore to cover the nakedness of the night with the bountiful joy that it could find in the jewels of the dark. The Moon hoped to brighten the Sky as much as the Sun could and he put all of his might into the purpose; but no one knew that he wasn’t even a close match.

He tried to destroy her skin, his conscience diseased.

His wounded ego needed her yelps of pain to be in peace.

Through her scars, she looked him in the eye.

Her soul was too superior for her anguish to defy.

When you have your back Against the wall,

After a thoughtless jump,

When you need to cushion the fall;

When you are at your best,

And when you are so low

You know the tears won’t help

And you cannot even explain the sorrow;

When you are neck deep in water

Or are trudging against the tide,

When the winds are not in your favour

And when the sails are not enough wide;

When hopes are meagre

When greed takes over

When conscience loses its hold

When the abyss is deep and cold,

There will not be a silhouette with a beacon to show you home;

There won’t be a shadow from behind the fog to save your soul.

Only You will come to your rescue.

You are your shining armor of silver.

And You are the Knight under it.

Love will enrich you, it will empower you. But more than that, it will enchant you. It will take you on journeys you never thought you would take. It will show you places you would have never heard existed. Love will create a new side to you. In its own irony, love will absorb every major part of you that you knew as yours and at the same time, shine a new kind of light on your crevices and blemishes in a way that you will be proud of them. It will make you lose yourself whole, and in the process, find what you actually seek. Love will hold you strong when you need it to, but will also liberate you in ways unimaginable; inspite of which, it is a potential destroyer- the worst there is. For, Love will break you with its yearning.

Her options were out in the open –
clearly demarcated. It was upto her to weigh them wisely. It wasn’t only about picking the lesser of the two evils; it was also about paying the price for it.She longed to have them both, and yet she could tell that she would loathe them equally. She had lost all her strength trying to balance the scale, her muscle had given way.

In one deep breath, she decided whether to bask in the gold of the sun and let it burn her, or to stay indoors and long for it to.

Or was she deliberately pushed into the meandering stream one winter morning,

She woke up to see she was flowing along- past cedars and pines and majestic windmills;

In the lap of the river, cutting through cities and wading through fields.

She was made of hard paper

The kind that stands even when tides swell.

Alas! She hadn’t seen how living waters could be lethal;

How long she could endure, only time would tell.

The river had a lot of jewels to be proud of

Rocks and lilies and fish that lived off its water,

They carried on relentlessly, sword and fighter.

The boat pelted against the smoothened rocks when the water was shallow,

And she sailed with pride when it was calm.

Be it the joy of spring, or when in the face of harm.

Was it gravity, or

The river decided to cause the turbulence, the boat would never know.

There was nothing said and nothing asked

But she felt a pang she wasn’t prepared for.

She toppled and tripped and hit the soil beneath

Gasping for air, she struggled to hold on to dear life

She looked around dismayed but couldn’t recognize the void

She only hit empty water where once there was love rife.

She would have given up the scuffle

Had it not been for the lonesome but plentiful bank.

The boat would have been tattered by the seething water

Or, in all of her loyalty, succumbing to the wrath of the waters, sank.

The bank held on, didn’t clinch or prod

It let her watch the river flow by,

And chose to play not protector nor guide

She was free to go if she willed, else, he was an ally.

You’ll carry your happiness in small quanta: making sure the world sees it, admires it and adopts it. You will want to keep it safe in your arms and in your eyes, and still want to be able to spread it far and wide. You will want to take it to fields for it to be one with the gold of the corn, and to the oceans in order that it could produce pearls for a wandering swimmer; you will want to offer it to a meandering gust of wind so it could enrich the world along its path, or to a neighbor going through a rough patch so as to make his day. You will be addicted to the idea of happiness and be in awe of the love it can create. And propagate. In your confusion of the darkness of the world, and in your quest for finding out why, you’ll come across occasional dunes of sand and storms of dust. You’ll want to cure the outburst by sowing in the soil the only seeds you ever knew – those of happiness and joy.